Over the past year or so, I have noticed that two news events seem to be in the headlines almost continuously:


Of course, these events are in no way linked.  You can't blame an earthquake on Microsoft (no matter how much you want to), any more than you can link the profits of Wal Mart to an eclipse of the moon.


But there is a coincidental link between these unrelated events. Compare these two tables: 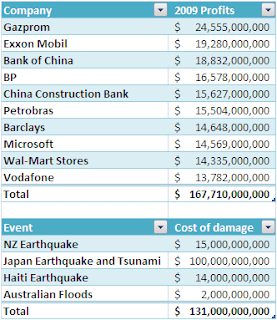 The first one shows the profits made in 2009 by the top 10 companies worldwide - after tax.  The second shows the estimated costs of the most recent natural disasters.  Not much in it is there?  Corporations actually earned about $30 billion more in profits (in one year) than the total projected costs inflicted by the four recent disasters I've listed.


I think it's pretty obvious where I'm heading.  Isn't it about time that we started asking, even demanding, that these massive profits are put to a better use than lining the pockets of traders, bankers and investors who already have more money than they could ever spend in their lives?  Imagine if the corporations all turned round and said: "This year, we are going to give all our profits to rebuilding the nations and lives destroyed by natural disasters".  I can't think of a single downside, can you?


So how do we make this happen?  I don't know if it ever will, but getting the idea out there is at least a start.  I don't expect everyone to necessarily agree with me, especially those who would lose out of they didn't get their bonuses/dividends/etc. but I would value your thoughts on this regardless.

One last thought:  I've already pledged to give whatever bonus I receive this year to charity, and I want to repeat it here.  How many of you are willing to do the same?  What have you got to lose?  Your house?  Your family?  Your entire livelihood?  Or just a new iPod and a laptop?  Think about it.
Posted by The Ranty Man at Monday, March 14, 2011
Email ThisBlogThis!Share to TwitterShare to FacebookShare to Pinterest

Leave a message after the rant. And leave your name, unless your spineless and like to hide. Chicken.